A Park Close to Home

Delivering A Park Close to Home

Exciting news! We are building a number of new parks across Merri-bek as part of our plan to bring open spaces to those areas that need it the most.

So far we have announced the following locations:

There will be plenty of opportunities to be part of these new parks. To stay up-to-date on how you can have your say, visit our Conversations Merri-bek website.

Read the media release announcing the creation of these two new parks.

What is A Park Close to Home?

'A Park Close to Home' is a plan to fill open space gaps in Merri-bek. It is about creating and improving access to open space in the areas that need it most.

A Park Close to Home identifies gap areas in the community where residents are not within walking distance to their closest park.

To guide Council on which gap areas to tackle first, the plan gives gap areas a high, medium or low priority based on:

Council is now working to deliver A Park Close to Home and is looking at ways to create open space and provide better access to current open space in the gap areas identified in the plan.

A Park Close to Home is a part of Future Merri-bek - Council’s vision to best prepare our city and community for Merri-bek’s projected population growth.

The Moreland Open Space Strategy defines open space as public land that has a leisure, sport, landscape value, habitat conservation, environmental or visual amenity function, or is zoned or reserved for public parks or conservation purposes. Open space may not always be green; it may be paved, such as in a town square, mall or plaza.

The following map shows the high, medium and low priority open space gap areas in Merri-bek. To find out what gap areas are in your suburb read A Park Close to Home background report (PDF 8Mb). 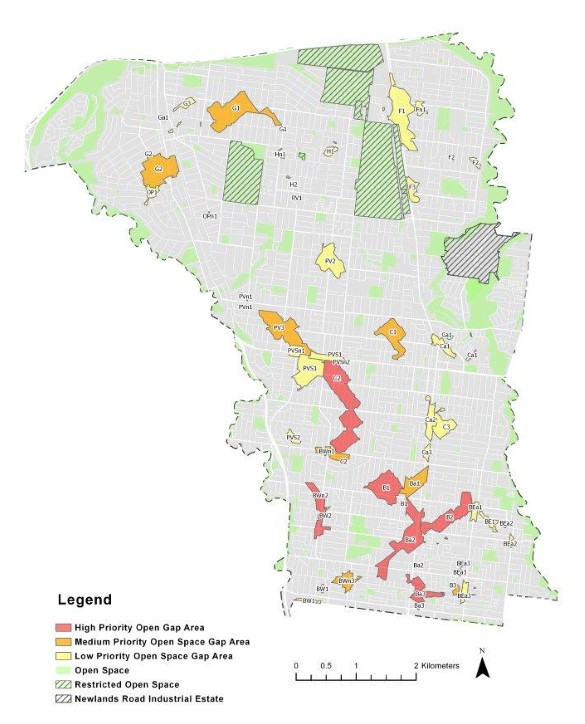 Why did Council develop A Park Close to Home?

With a baby boom underway and more people than ever choosing to make Merri-bek their home, Merri-bek’s community is rapidly growing.

This growth places pressure on all of our existing infrastructure, including open space, so Council is investing in its existing parks and working to create new local parks in areas with the lowest access to open space.

Council is committed to creating new open space and the Council Plan (2017-21) prioritises the creation of at least two new parks in areas with the lowest access to open space. A Park Close to Home will help deliver on this commitment.

For more information on how and why the plan was developed, read A Park Close to Home final report (PDF 2Mb).

How did Council develop A Park Close to Home?

A cross-organisational approach was taken to develop A Park Close to Home. Officers from across Council developed the background research, guided the decision-making process, and will continue to be involved in implementing the plan.

At the 6 December 2017 Council meeting, Council considered a Report that:

How is open space funded?

To help pay for new open spaces, Council collects funds from developers when land is subdivided. This money is put into an Open Space Fund and is then used to create or upgrade open spaces across Merri-bek.

The Park Close to Home plan has been designed to help guide how and where to spend this money to create new open space where it is needed most.

Why does Council have an Open Space Fund, and who pays it?

The Subdivision Act 1988 allows Council to seek a cash payment or land contribution (or a combination of both) towards open space at the time of subdivision of land. The funds must be spent on open space.

Yes. At the September Council Meeting, Council resolved to allocate approximately ten percent of the previous full financial year’s income to the fund on open space improvement projects across Merri-bek.

How does Council buy the land to create new open space

A Park Close to Home proposes a proactive approach to land purchase, by either negotiating purchase with landowners, purchasing through the open market, or acquiring land in lieu of a cash-based open space contribution.

No landowner will be forced to sell their land, and the land will not be compulsorily acquired.

What about other open space outside of the gap areas?

The Moreland Open Space Strategy sets out actions that will improve open space across Merri-bek.

Activity Centre Structure plans and other documents also identify open space projects that can be funded through the open space fund.

Ongoing monitoring of A Park Close to Home is proposed to ensure its effectiveness, and allow for informed decision making about how the fund is spent on open space.

Find your closest park or a park with the facilities you need.