Moreland has always been an innovative leader in environmental initiatives and the Melbourne Renewable Energy Project (MREP) is another example. Due to MREP all the Council’s electricity use is 100% renewable energy. It is also a major contributor to the Council reducing its carbon emissions by 70% since 2011. MREP has also inspired other groups of councils and businesses to develop their own version of collective purchasing of renewable energy.

What is the MREP?

The MREP is an innovative way of collectively purchasing renewable energy. Merri-bek City Council is one of a group of Melbourne local governments, universities, cultural organisations and corporations that came together in 2017 under the facilitation of the City of Melbourne to invest in the construction of a purpose-built 39 turbine, 80 MW windfarm at Crowlands, near Ararat in north-west Victoria.

The MREP is an Australian first approach that enables cities, corporations and institutions to take an active role in securing renewable electricity supply and taking action on climate change. The windfarm then provides a direct source of clean renewable energy for each of the project members. The windfarm is owned and operated by Melbourne-based clean energy company Pacific Hydro, and the power is supplied by its retail arm, Tango Energy.

On 1 January 2019, Merri-bek City Council began purchasing all its electricity for Council operations from the Crowlands Wind Farm, 20 kms north-east of Ararat in north-west Victoria. This includes all street lights, Council buildings, public barbecues, and electric cars. As a result, Council is now powered by 100% home-grown renewable energy and has reduced its emissions by 70% since 2011.

The wind farm will supply all of Merri-bek Council's electricity for the next 10 years under a group power purchasing agreement. It provides long-term price certainty, enabling Council to mitigate the risk of increased energy costs in a volatile market for its operations.

What are the other benefits of this project?

Members commit to purchasing 88 GWh of electricity each year which is equivalent to taking over 22,000 cars of the road every year. Additional power unused by members feeds into the wider electricity market and increasing the volume of renewables that the wider community can access. This in turn reduces the overall amount of emissions generated from the electricity sector.

At a regional level, the project created more than 140 regional jobs during construction as well as eight ongoing maintenance jobs. Other benefits to the local community include the installation of a rooftop solar photovoltaic system and storage battery for the Crowlands town hall, making it one of regional Australia’s first fully solar powered public halls. 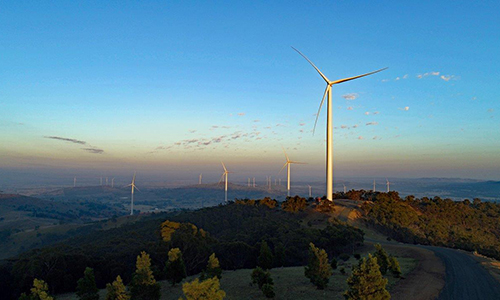