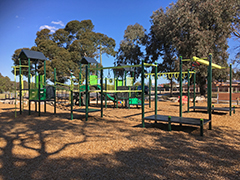 Funding was allocated in the 2017-18 Council budget to implement a play space upgrade at Moomba Park.

Proposed works were carried out to the Moomba Reserve play space and are very similar to those shown in the Moomba Park Play Space Draft Concept Plan (PDF 566Kb).

Works commenced onsite in November 2017 and were completed in April 2018.