After a number of community members expressed opposition to the location, which had been determined by previous community consultations, Council again asked residents for their preferred location for the toilet out of two possible options. This round of consultation concluded on 2 July 2017.

A survey was conducted, primarily online, however, Council also provided the community with the option of calling Council to take part in the survey over the phone, and Council officers visited the park with mobile devices to record the views of park users at various times throughout the consultation.

The survey provided the community with a comments field to share their views. All comments were reviewed and considered by Council before coming to a final decision.

Fifty-five respondents (19.5%) commented in the free text box that they did not want options A or B and would prefer a toilet elsewhere. While the survey did not provide more than two location options, the views of this group (neither A or B) are represented separately in the results below.

Of those who want a toilet:

Council also received a number of emails and calls from community members expressing the view they did not want location A or B. The majority of those who sent an email also completed the survey, so their views are included in the survey results. Any views received by those who did not fill in the survey were also taken into account.

A number of comments were received from the community asking for reconsideration of the external appearance of the toilet and the positioning of the concrete path, to reduce the impact on the park’s open green space.

Council has been able to respond to both of these concerns and some cosmetic improvements have been made to the appearance of the toilet, including colouring, roof style and type of cladding. The path has also been repositioned to the outside of the park. 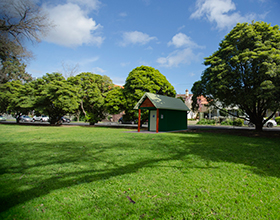 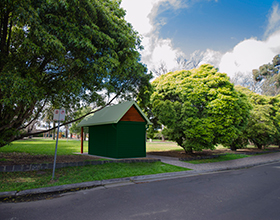 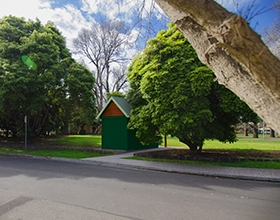 Above left: Artist’s impression of the toilet design in position (location B)
Above centre and right: Views of the toilet and path from Leinster Grove.

Works to install a toilet at the location shown on the aerial map below, which shows both the toilet and the path location, were completed in December 2017. 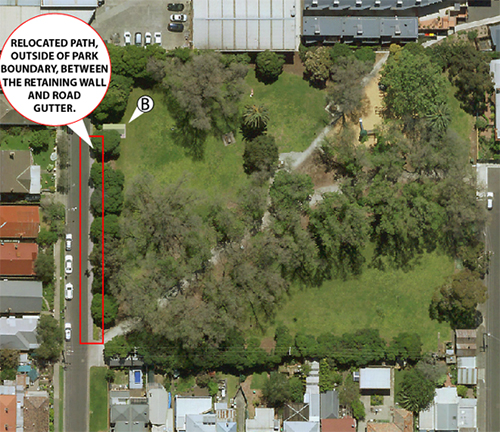 Above: Aerial view of the park showing the toilet (B) and path location.