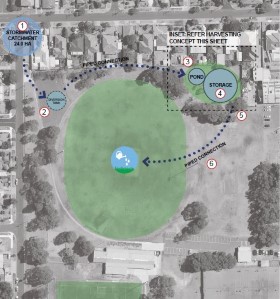 The aim of the project was to construct a stormwater harvesting system that would supply stormwater to irrigate Hosken Reserve, saving up to 10 million litres of drinking water every year.

The stormwater treatment system also improves the attractiveness and passive recreation use of the reserve through new landscaping and a pedestrian access path.

Consultation with the local community, school and sports clubs was held in November and December 2015. This involved hearing from the community about what they value at the reserve and discussions over the draft concept plan.

Over 65 local residents completed hard copy surveys or provided feedback to Council Officers out at Hosken Reserve on Tuesday 1 December 2015. The overwhelming majority of feedback was supportive of the project. Some frequently asked questions that occurred during the consultation were:

A draft concept design plan was developed and consulted with the community.

Based upon the feedback received through community consultation, design of the system was completed.

Key elements of the design are:

Public tender for the construction works was advertised on Saturday 12 March 2016 and closed on Thursday 7 April 2016. Evaluation of the tenders received has been completed.

At its meeting on 8 June 2016 Council endorsed the appointment of Entracon Civil to undertake the supply, construction and commissioning of this stormwater harvesting system.

Construction of the system was completed in July 2017.

Second half of 2016
Construction complete