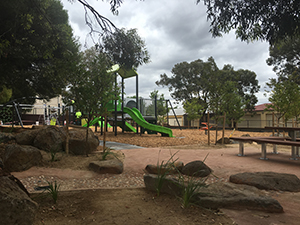 Gilmour Park, located on the corner of Barrow and Campbell Street in Coburg, has been upgraded with funding from Council's capital work program.

A celebration of the upgrade of a much loved park, where the local community come to relax and play was held on 7 March 2017.

Stages of the project

In August 2016, a Gilmour Park Upgrade Concept Plan was developed and sent to residents within 400m of the park.

Local residents were invited to informal consultation sessions at Gilmour Park to discuss the draft concept plans. Over 60 people attended the sessions and 51 submissions were received (via email or completion of survey).

A Revised Concept Plan for the upgrade of Gilmour Park was developed in response to commonly-shared requests and thoughts gathered during consultation with the local community.

Sections of the existing timber seat edge were refurbished, to retain the divide between the open grass and play space. The existing picnic tables remain, plus an additional table with three benches, a 1.8m square platform seat and four new park seats replace the existing two. The existing concrete footpaths remain and all three entries gated.

A new timber post and steel panel fence will freshen the parks presentation and if budget allows the black chain mesh fence on the lane way to the north will be relocated to the other side of the trees, to maximise the open grass area.

Although the basketball 1/2 court received general support from the local community, unfortunately it has been removed from the scope due to the proximity to neighbours and concerns regarding noise and late night use. Similarly, the barbecue has not been included due to a mixed response from local residents, mainly expressing the desire to retain the local park status rather than attract more users. The herb boxes have not been included due to maintenance concerns.

The total budget for the park upgrade was $125,000 and was managed by Council's Open Space Design and Development Unit.