A community survey was undertaken in September and the full report is now available.

The official launch of the Wilson Avenue public space, between Sydney Road and Black Street, took place on Sunday 2 August.

A launch party with music and performers showcased the new space, which features an urban bouldering wall, landscaping and seating.

The new public space in Wilson Avenue Brunswick was launched in August 2015 and features landscaping, seating and an urban bouldering wall.

The Wilson Avenue project is part of a wider program of urban renewal in the Jewell Precinct, as identified in the State Government’s Plan Melbourne.

In July 2014, Council decided to close a portion of Wilson Avenue and build the brand new public space fronting Sydney Road. This decision followed an 8 week trial period in February and March 2014, when a 'Pop Up Park' was installed at this location.

The space was officially opened on Sunday 2 August 2015.

In addition to Council funding, this project was partially funded under the Victorian Government Community Crime Prevention Program. It has also received a grant from Melbourne Water.

A period of public consultation took place in April 2014, following the trial of the 'Pop Up Park', and 356 submissions were received. Ninety-four percent of submissions supported establishing a permanent public space on Wilson Avenue.

View the schedule of public submissions and responses regarding the road closure (PDF 508Kb).

Eighty-four percent of the community stated that they wanted to see a wall in the new space. Urban bouldering is a fast growing sport and it is practiced by young and old, male and female, expert and novice. 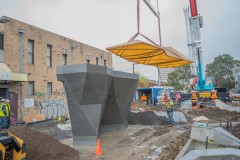 Following Council's decision to proceed with closing a portion of Wilson Avenue and proceeding with new public area, Council took all the feedback into account and designed a new space.

In response to community feedback, the new public space has an urban bouldering wall as a feature. The wall is approximately 9 metres long and 3 metres high, and surrounded by softfall.

View a photomontage of the proposed new public space.

The main contractor commenced construction of the new public space in February 2015 and completed the work on 26 June 2015.

Plan of planting for the new space (PDF 304Kb)