Watch the time lapse video: 'The Making of Bush Reserve'.

Fast-track images show the Bush Reserve site being bulldozed and construction on the site being carried out, from August 2013 to June 2015. 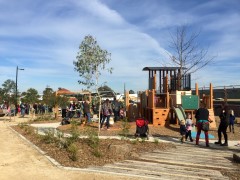 Bush Reserve is located at 227 Bell Street, Coburg on the site of the old Council depot. After Council vacated the site, it was leased by Melbourne Water for 5 years as part of the Northern Sewer Project. Melbourne Water returned the land to Council and funded its redevelopment as parkland.

William Thomas, Assistant Protector of Aborigines from 1838-1849 and Guardian of Aborigines 1849-1867, built a homestead on the site in 1842 and lived there for several years. Thomas provided protection from the effects of European settlement for many men, women and children of the Kulin Nation. His association with Bush Reserve and the indigenous people of the area was documented in a 2006 heritage report, which resulted in the site being listed on the Heritage Victoria Inventory.

The homestead was demolished in 1981 and the area covered in concrete, but the footings remained intact under the surface. In 2013, Council engaged specialist archaeologists to excavate the historically significant footings as part of the Bush Reserve Redevelopment. The footings of the 1842 building have now been successfully restored and included in an interpretive landscape, which will create an interesting feature in the new parkland. 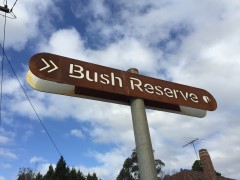 A community consultation session was held in July 2013 at Bush Reserve. The draft concept plan was revised to include comments and suggestions received through consultation with the local community.

We developed the Bush Reserve Redevelopment Final Concept Plan from the feedback we received on the concept plan.

A Bush Reserve Redevelopment Detailed Design Plan was then created, setting out the details for construction.Major earthworks and demolition contracts were subcontracted out to specialist companies, with general landscape construction works to be completed and/or managed by our in-house Parks Improvement team. 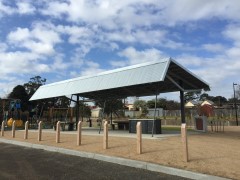 Demolition of the old Council depot started in August 2013, but completion of this work was delayed for many months while Council waited for our energy supplier to decommission the power infrastructure on the site, which prevented us from demolishing some of the buildings.

Construction work began again in May 2014. We encountered some difficulties on the site, including a significant amount of sub-surface rock, which made progress slower than expected, but all the major earthworks were completed by early August. Since then our Parks Improvement team and many other subcontractors have been working on the landscape works across this large reserve.

Construction of the playground, installation of furniture and trees, surface treatments and fencing to the upper terraces, connecting paths, and restoration of the heritage site completed the project in May 2015.

Bush Reserve in Coburg will be open to the public end of May 2015. The park features a children's playground, barbecue and eating area, swing for children in a wheelchair, community orchard and basketball court.