Council has delivered approximately 1200 square metres of new public open space in 33 Saxon Street, Brunswick located at the south west corner of Saxon and Phoenix Streets. We are working towards developing the site into a new community hub.

The site contains two, two-story buildings. A former school building is located at the north end of the site, adjacent to the Phoenix Street frontage and an iconic historic house is located in the middle of the site. The new public open space will wrap around the southern part of the house. Council is seeking to activate the buildings on the site to assist in achieving its broader vision.

Council plans to make the site a thriving public space for community groups and events. However, it is going to take several years to fully realise our vision for the site. We are keen to work with the community to stage events and activities in the outdoor spaces. 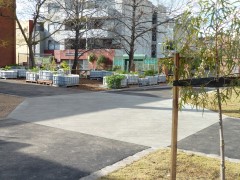 The heritage house on site was the former residence of Alfred Cornwell, the proprietor of a major pottery and brick works in Brunswick. Built in the Italianate style the mansion was an expression of wealth and social position by a major 19th century industrialist overlooking his businesses. The site operated as a Catholic secondary school for several years until it was bought by Council in 2010.

Council has partnered with 3000 Acres to create the food garden that is currently operating on the site. If you wish to be part of the food garden, follow 3000 acres on Facebook.

The proposed plan of the public open space was put up for consultation the Sydney Road Street party on the first of March. There was an overwhelming support from the community. Feedback in form of 99 filled out surveys was received.

The plan for the public open space comprises three quadrants as well as north-south and east west paths. A central diamond shaped garden square is the focal point of the open space.

The open will develop over time to integrate better with the Heritage House and Stables building. The food garden will continue to operate in the existing space along Saxon Street.

The project was tendered from 14 March to 2 April 2015. Citywide Service Solutions P/L were awarded the job of construction.

Construction was completed in July 2015.