Stage 1 of the Coburg City Oval Redevelopment opened up Coburg City Oval for greater community access. It sees a newly landscaped western edge that opens up access to the oval with the installation of operable fencing and gates. This improves circulation and connectivity while preserving the capacity of the oval for holding ticketed events.

Future stages of the City Oval Redevelopment will see improvements all around the oval to improve access, increase amenity and recreation opportunities within the precinct.

Council prepared a Draft Coburg City Oval Precinct Landscape Master Plan to improve community access to this open space in Coburg, which was available for comment in December 2014. 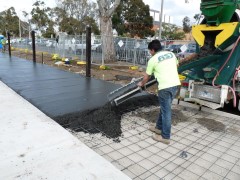 Early works began on site at the City Oval in April 2015, with removal of low quality vegetation across the western face of the sportsground and gravel paving from the rear of the Bowls Club up to the ticket entry to the Oval. At this time the opportunity was taken to carry out formative pruning of the two large Gum trees that have been retained in this vicinity.

By end of June 2015, these works had given a face lift to the Oval that includes the installation of new charcoal mesh fencing to the rear of the pavilion and other buildings on the western boundary along with improved pedestrian access with the creation of a footpath along the edge of the Russell Street carpark.

While these improvement works were progressing detailed documentation was being finalised for procurement, resulting in appointment of contractors for fabrication and installation of heavy steel operable fencing, extensive new concrete paving and spectator terracing along with associated earthworks and in-ground services.

By November 2015, practical completion of all civil works was achieved and landscaping works underway for provision of the final surface finishes and planting.

The oval opened to the general public in July 2016. All of the gates on the western edge will be in the open position once the Oval is in a safe condition for public access. These and all of the existing gates around the park perimeter will be in the closed position on match days (or other ticketed events) apart from the single ticket booth gate.