You are here: Archive Home > About us > Our City >

Where is the City of Moreland?

Moreland is a municipality in the inner north of Melbourne, in the state of Victoria, Australia.

The City of Moreland covers 50.9 square kilometres and is one of Melbourne’s most populous municipalities with more than 160,000 people.

The City of Moreland lies between 4 and 14 kilometres north of central Melbourne.

It is bordered by the Moonee Ponds Creek to the west, Merri Creek to the east, Park Street to the south and the Western Ring Road to the north.

The City of Moreland covers the suburbs of:

Visit the City of Moreland profile and suburb profiles for demographic and population information about Moreland.

Visit Locality names and boundaries for Moreland map and suburbs.

Moreland City was formed on 22 June 1994, by the amalgamation of Brunswick City and Coburg City. On 15 December 1994 it was expanded by the addition of the southern parts of Broadmeadows City - Glenroy, Oak Park, Fawkner and Hadfield.

Moreland is a locality situated either side of the boundary between the former municipalities of Brunswick and Coburg, around the Moreland train station, and was selected as the name of the new amalgamated City.

Moreland locality was named after the land purchased in 1839, from Robert Hoddle’s survey, by Farquhar McCrae, magistrate and speculator. McCrae (the brother-in-law of Georgiana McCrae), named his property Moreland after the place of birth of his father in Jamaica. McCrae built his La Rose home on the elevated area west of Moreland (Coonans Hill), in 1842, at 22 Le Cateau Street. It is on the Australian and Victorian heritage registers. See Victorian Places for further details. 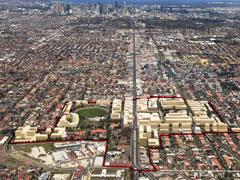