You are here: Archive Home > About us > Our City > Local history > History of Coburg and Pascoe Vale

History of Coburg and Pascoe Vale

Coburg was surveyed by Robert Hoddle in 1837–38 and he recorded details of the first white person living in Coburg. It was a Mr Hyatt who had a sheep station and hut on the east bank of the Merri Creek near present Outlook Road.

Hoddle marked out a 327 acre village reserve with two roads for the district – Bell Street West and the other, later called Sydney Road. In 1840 the place was named Pentridge. The name was given to the area by a surveyor called Henry Foot who lived and worked near Merri Creek in 1840. Pentridge was named for the birthplace of Foot's wife: Pentridge in Dorset, England.

The oldest home in Victoria

Dr Farquhar McCrae was an extremely wealthy surgeon who purchased 600 acres in the area which he called Merri-bek. In 1841 he also bought land called 'La Rose'. The house built on La Rose in 1842 or 1843 (although it has been added to over the years) is the oldest known private dwelling in Victoria still standing on its original site and the fifth oldest building in Victoria.

Early settlement in the 1840s

By 1849 there were 21 farms in the area. The first storekeeper was George Jones in 1840, and in 1842 the first inn, The Golden Fleece, was built on Sydney Road just north of Page Street. The 1850s were busy years for Pentridge. By 1850, the Wesleyan Church in Bell Street was built, the foundations for St Pauls were laid and Holy Trinity Church of England was built. The same year Pentridge Stockade was established and in 1852 the Presbyterian Church on the corner of Rennie Street opened. The next year a government tent and then, replacing it, a wooden schoolhouse, were located on the site of the present Town Hall.

The first local paper, the Brunswick and Pentridge Press, began in 1858 and pipes to carry water to Pentridge from Yan Yean for the first time in the same year. In 1859 Local Government began with the formation of the Pentridge District Road Board. The board, formed to get roads built in the area, met in private houses for eight years. In 1866 it was granted land near the present town hall. A bluestone building with adjoining wooden offices was opened in 1867.

In the late 1850s quarrying of bluestone began, and by 1875 there were 41 quarries in Coburg. In 1867 Father Charles O'Hea called a public meeting to change the name of the district. Residents were embarrassed to say they lived in Pentridge, because everyone associated the name with the stockade/gaol. It was suggested by Robert Mailer of Glencairn that they should change it to Coburg as the Duke of Edinburgh was soon to visit the colony and he was a member of the royal house of Saxe-Coburg. The government agreed and the change was made in March 1870.

The shire of Coburg

By 1865 there were six shopkeepers, four bootmakers, three bakers, three butchers, two saddlers, two blacksmiths, two ironmongers a druggist and a draper along Sydney Road. The people living in Coburg worked at different jobs, but there were many farmers, quarrymen, market gardeners, retailers and tradesmen. Coburg became a shire in 1875.

The growth of Coburg

In 1884 the railway line opened, and in February 1889 the horse tram service began along Sydney Road (electric trams did not start running until 1916). In 1888 Coburg railway station was built. By l899 there were 6000 people in the district. In 1891 Passfield's bakery opened and W. E. Cash the plumber opened his store in 1898.

In 1905, Coburg was gazetted as a borough, and Thomas Greenwood and his wife Martha became Coburg's first Mayor and Mayoress. The 1869 Public Hall was extended in 1909, but was still too small for the growing city. A Brunswick architect, Charles Heath, completed plans for new offices, a town hall and soldier's memorial hall with clubrooms. The new Coburg Town Hall opened in 1923. More was added in 1928, including a lounge area, space for a future library, a supper room, foyer and balcony.

The land that became Lake Reserve was purchased in 1912. A weir was constructed in 1915 to form a lake and the reserve became immensely popular, with diving boards, wading pools, kiosk and gardens. The Great War of 1914-1918 saw seven hundred Coburg men serve and 162 lose their lives. In 1919 Lincoln Mills began operating, and stayed open until 1980. The earliest 'moving pictures' screening was in the old Public Hall in Bell Street on 11 October 1910. The Lake Hall Picture Theatre opened on 29 June 1912 and continued until 1921. In 1927 the movies were shown at the West Coburg Progress Association Hall (later the Progress Theatre). Coburg finally gained a free library in 1952, housed in the Town Hall complex.

In 1983 Council bought the old Safeway supermarket in Victoria Street and transformed it into a new library – the original library had grown so large. A Municipal Office annexe to the east of the Town Hall was opened in 1984.

In 1994 the 135-year-old Municipality of Coburg ceased to exist when it merged with Brunswick to become the new City of Merri-bek. 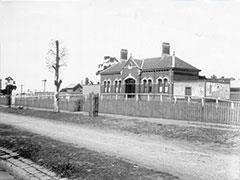 International Day of People with Disability