You are here: Archive Home > About us > Our City > Local history > History of Brunswick

The area that surveyor Robert Hoddle marked out, destined to be Brunswick, was determined by two straight lines (which later became Park Street and Moreland Road), drawn from Moonee Ponds to Merri Creek.

Halfway between the creek a line north to south was marked which at first was known as Pentridge Road and was later named Sydney Road in 1859. The area was then divided into farms, eleven on each side of the road running back to the creeks with all but two being ten chains wide.

The first land sales were in 1839 and 1840, most being bought by speculators/investors who did not come to live there. Daniel Campbell's land portions were sold on to Edward Stone Parker and Thomas Wilkinson in 1840. They named their property Brunswick, probably in honour of the royal wedding that had occurred 'back home' in England ­ Brunswick was the name of the royal house of the bride, Princess Caroline. The two tracks to their property were for the same reason called Victoria and Albert (Queen Victoria's new husband) Streets. Wilkinson was very active in local affairs and came to be known as the 'Father of Brunswick'.

He donated the land in Sydney Road where the Wesleyan Church was built (now Sydney Road Community School). Wilkinson built himself a small house on the corner of Sydney Road and Albert Street. Church services were held at his home until the church was built, and from 1846 his house served as a post office. Wilkinson built shops for sale or lease along Sydney Road. He was elected first chairman of the Council when it was formed in 1857 (the first Council meeting was held in the Cornish Arms Hotel and there were seven councillors). No wonder Wilkinson's name for his property was adopted for the entire area.

From the 1840s the settlement started to grow. The Retreat Inn, Brunswick's oldest hotel opened in 1846, and provided a popular stopping place for travellers. However it was still an isolated rural community with a dirt track for a main road, until everything changed with the discovery of gold. Gold was discovered in Victoria in 1851 and the quickest way to the fields in Ballarat and Bendigo was through Brunswick. A camp was set up opposite the Methodist Church where people on the way to the fields could rest and organise themselves for their journey. Next to the church was a 'Rag fair' where clothes and goldfield equipment were sold. More shops and hotels opened, including the Brunswick Hotel in 1852 and the Edinburgh Castle and the Sarah Sands both in 1854. Gold fever caused a rush of settlers to Australia. The settlers needed houses once they had tried their luck on the fields, and suitable clay had been discovered in Brunswick by John Glew in 1849. 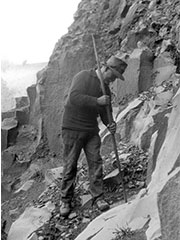 The natural deposits of clay for bricks and bluestone for houses and roads meant Brunswick's quarrying industry was born. The Cornwell works began in 1861 and John Barry and Jenkin Collier launched the Hoffman brickyard in 1863, which eventually employed 800 people. By 1865, most of the population of 3000 was involved in brickmaking and bluestone 'dressing'.

The first schools in the area were run by individuals in private homes. The Methodists opened a school in 1849 that combined with a Presbyterian one to become Central Brunswick State School 1213 in 1877. A Catholic school began in a back room at the Brunswick Hotel in 1860. This became St Ambrose Primary School. The Mechanics Institute opened in 1868. It provided library books, but a fee had to be paid. A free service for residents did not start until 1926. The library moved to the town hall facing Sydney Road in 1976, then to its present location in the large hall in Dawson Street in 1992. The Campbell Turnbull library in Melville Road opened in 1982.

The town of Brunswick

In 1884 the railway line came to Brunswick, and the first cable tram in 1887. (In 1916 electric trams began in Lygon Street and replaced horse drawn buses.) In April 1888 Brunswick was proclaimed a Town with a population of 14,792. By 1891 there were as well as the brickworks, nail and rope factories, two banks, three schools, two newspapers, five railway stations, a Mechanics Institute and three fire brigades! Electricity supply began in 1914.

After the First World War new industries developed creating more employment, hosiery and textile companies such as Prestige, Holeproof and Peerless. By 1928 the population had reached 55,799. Brunswick Town Hall held the best dances in the north, and there were many theatres showing films. The 1930s saw the decline of the brick and clay industries as much of the clay and bluestone had been used up. Many of the quarries were filled in and became parks and reserves. Migration from European countries after the Second World War saw thousands of people come first from Italy, then Greece, Turkey, Lebanon and other countries.

The Sky After Rain